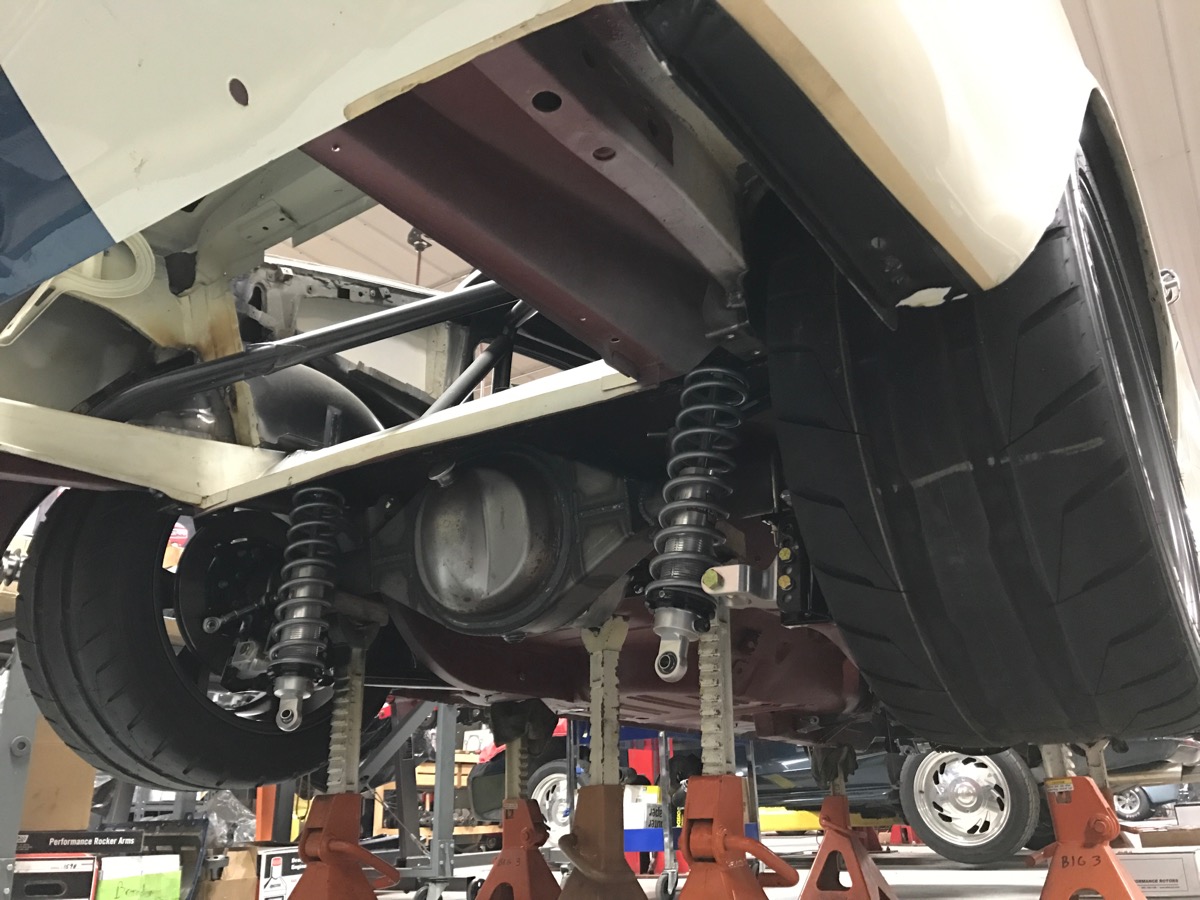 Here is a special project we are doing in cooperation with our neighbor Shelby Parts and Restoration (SPR). This mustang started out as a 1966 A-code fastback and the previous owner intended to finish it up as a vintage racing legal track car and run it at Road America. Once the painted body shell received the 8-pt cage and SPR installed the R model rear and side plexiglass windows, the project stalled and SPR bought the project from the customer and set it aside for the time being. Along came Ruben Bonales, looking for a project... and after some time a direction became clear. The car would be built as a beastly restomod by Big 3 with  assistance from SPR.
As Ruben already owned a stock 66 fastback, and soon would be receiving his 2016 gt350, it was decided to go with a theme that fit somewhere in-between. We wanted an outwardly "correct' appearing GT350 R model replica, but would take a few liberties with the rolling stock and under-hood appearance. We also wanted a car that would cruise at 1800rpm with zero fuss, and make instant torque when the pedal was floored and put out close to 600hp... a car that could hot-lap Road America as well as easily put through city traffic with no drama or frustration.The first thing we looked at was suspension. Starting out with the rigidity of a 8pt cage made the idea of the old leaf spring rear and stamped steel front suspension seem like a waste of potential. Previous success with Total Control Products suspension kits made the choice easy. Front Coil Over Conversion. Then we turned our attention to the drivetrain. We wanted to deliver 575-600hp with a relatively small cam and great street manners, so a 427 Windsor stroker based on an aluminum Dart block and Heads was the ticket. For the transmission we chose a Quicktime bell housing and Mustang Steve Cable clutch. Cable setups are simple, reliable solutions that provide plenty of room for headers as well as free up firewall space that would otherwise be used for a master cylinder. A McLeod RST dual disc clutch will transfer the power and provide great feel on the street and track. At this point we came to the wheel/tire combo. Original style 15" Torq Thrusts would have been ideal, but the tire selection is extremely limited and no decent high performance street tire is available in a diameter and with that would work on a 15". 17's would have been great, but we still couldn't get quite the right 26"+ diameter in the Nitto NT05 we wanted to run. The NT05 is a great tire for the $, and Nitto also makes a matching NT05R rear drag radial should ruben want pair of rear drag strip wheels/tires to run. So, we went to a 295/35-18 on a 18x10 Torq Thrust. We didn't want this car to have the G-Machine look with bright huge wheels and tiny "rubber band" sidewalls and there were concerns about the 18's looking too big, but the old school dark/matte color scheme we are using to emulate the original magnesium wheels should help quite a bit.

To fit the 11.85" wide rear tires we altered the frame rails and installed a mini-tub kit. Next up we will be using the Wildwood 12.2 4-piston brakes to determine the flange-to-flange rear end with, and order a complete assembly from Currie. After that we will move on to the front end and determine how to maximize front wheel/tire width. The mini-tubs have been welded in and braced with 90deg strips. Headers from FPA (Ford Powertrain Applications).
FPA was very easy to deal with when ordering the headers for the Dart heads. We elected to get them uncoated as we assume there will be a fair bit of modification to get them to fit correctly in this custom application. We used a 302 block for mock-up purposes and machined some risers to get the correct 351W deck height. In real-world lighting, the wheels and tires look just how we intended. They look very beefy and aggressive but don't jump out at you as 18" wheels. At a glance the car still looks like an old-school R-model... not a big wheeled resto-mod... which is exactly what we were going for. We placed the wheels where we want them and using the Wildwood rear disc thickness we ordered a custom width full rear end from Currie enterprises. 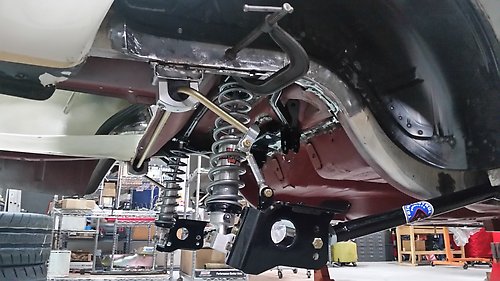 We went with custom seats from TMI. They are a nice modern twist on the original seats but with more lateral support. We went with some healthy Wildwood 6 pistons up front. Here is the all aluminum stroker Windsor from Todd Goodwin of Goodwin Competition.  This motor will make 640hp/640tq on pump gas. No corners were cut. We plan on sealing the air cleaner to the hood scoop... so we had this custom hood made. Its an exact copy of the original all-fiberglass "porthole" hoods used on 65 Shelbys, except this one the scoop has been increased by 30% in height and width. Its a nice subtle touch. The door and fenders still need some aligning, but she sure sits nicely.